Posted on August 8, 2018 by David Anderson Leave a comment

Due to storms being forecast on and around Snowdon at the weekend we have reached the decision to postpone Greg’s Sponsored Climb until the weather improves (date to be confirmed but possibly mid-September).

Greg is understandably upset but determined that the climb will still go ahead at a later date.

The conditions on Snowdon will be far too dangerous and treacherous for anyone to climb and none of the Spider-Ede team would want or expect Greg to put himself in any danger.

We’re sure you will all support Greg with this decision.

On behalf of Edie’s family we would like to thank Greg for all that he is doing and the amazing amount he has raised so far. We are also truly grateful to you all for the generous donations which have been made to the Spider-Ede Appeal through sponsorship for this climb which will, of course, be carried forward to the new date

Taking place on Friday 12th October, 2018, the Spider-Ede Appeal is presenting our biggest event yet! To celebrate Edie’s 4th Birthday we will be holding Spider-Ede’s Birthday Ball at the prestigious five star Hillbark Hotel in Frankby, Wirral.

Arrival is from 6pm and the evening will be hosted by Radio City 2’s Claire Simmo.

Entertainment is by X-Factor & Dancing On Ice star Ray Quinn, and also Tricia McTeague, and LUMA.

There will be other special guests and surprise entertainment on the evening.

Attendees will enjoy a 3 course meal and wine with their meal.

Tickets are no longer available to purchase for this event.

Join us on 1st July aboard the Mersey Ferry for an evening of live music with Marc Kenny and the Beatles tribute act, Paperback Writers.

The cruise will depart from Seacombe ferry terminal at 7.30pm and take approximately 2 hours. There is a fully licensed bar onboard as well.

Tickets are £20 per person and are available from the Spider-Ede Cruise Page on the Mersey Travel Booking Site.

Please note the live music performance area is on the upper deck which is accessible by stairs only.

Eyes down, clickety click 66, and on its own, number 10 (as our Captain America would say!). Yes Bingo night is back again in aid of the Spider-Ede Appeal. Come along for a night of fun, laughs and the chance to win some prizes!

Entry is £10 per person which includes a book of 5 bingo games. Dabbers will be available to buy on the night as well. We’ll also have a little raffle on the side, spot the ball and there’s a jackpot prize on the bingo as well.

Tickets are available via Sarah Anderson, or you can pay via PayPal on our ticket link. Please just add that it’s for Bingo in the notes! The ticket will also enter you in for an extra draw on the night so bring this along to be in with a chance of winning.

For more information, and to keep abreast of updates, visit the Bingo Night event page on Facebook. Genting Casino Poker Tournament in aid of the Spider-Ede Appeal 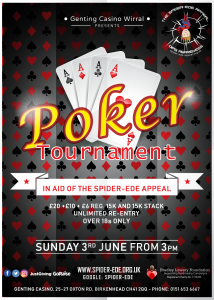 We’ve had some heroic efforts for our Edie lately. Richie Hellon walking 300 miles in 5 days to raise over £4k and John Hammond doing marathon after marathon raising similar amounts, before tackling the gruelling Marathon des Sables for Edie. These people stand out because of the extremes that they go to.

Another man that is standng out as pushing himself to his extremes is Gregory Weston. This amazingly brave man suffered a devastating brain injury in 2011. He spent a month in a coma, during which time doctors had suggested turning off his life support. He survived, spending the following months in critical care, then a high dependency unit, and more than a year after that in a chair.

He fought for the next few years to regain the use of his legs, and he continues to fight to regain their full use. He has been left quite dramatically disabled as a consequence of a simple fall, but he’s never allowed that to keep him down. His positivity has also led to him helping other disabled people at the hospital where he was a patient.

Now Greg wants to help Edie, and he needs support to do so. Please take a look at the poster below, and visit Greg’s JustGiving page, leave him a message, or sponsor him; your encouragement will be enormously appreciated. You can find out additional information on Greg’s Facebook Event Page. 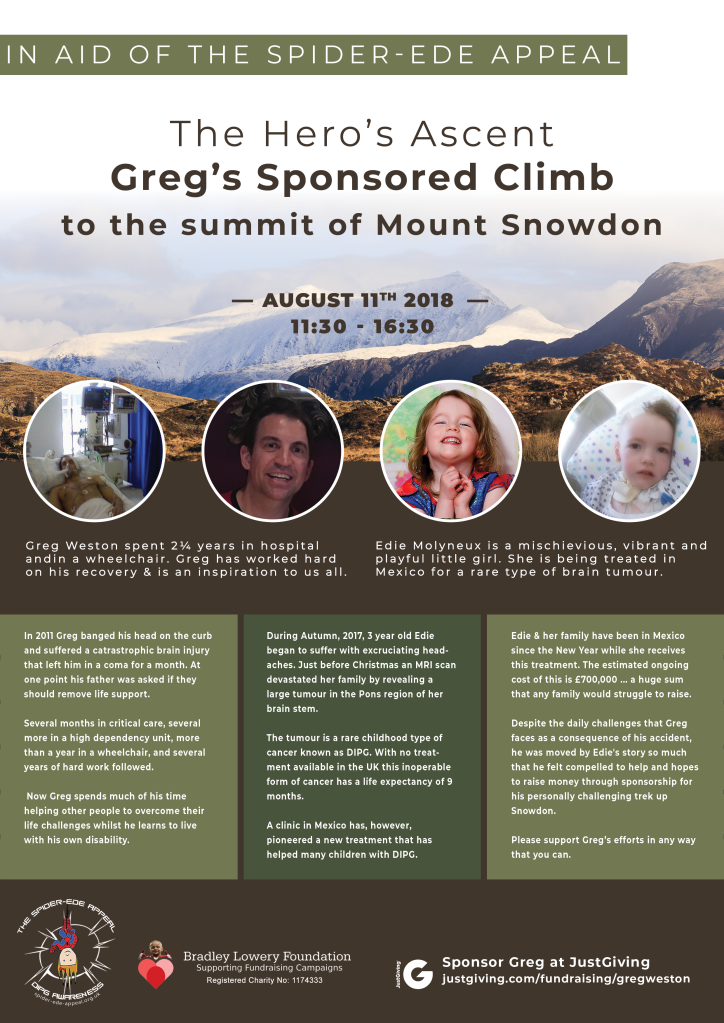 On this coming Sunday, the 27th May, The Swan in Prenton (map) are hosting a fundraising day in aid of the Spider-Ede Appeal!

With live music, raffles, face painting, Bert’s bingo, popcorn, sweets, candy floss, a cake stall, beat the goalie and teddy tombola there will be enough to keep everyone entertained.

A perfect Sunday afternoon out for all the family! 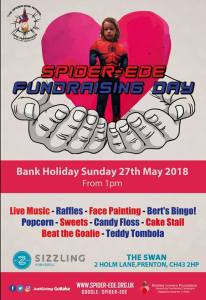 Spider-Ede to Line Up at the Randox Health Grand National

Posted on April 12, 2018 by David Anderson Leave a comment

Organisers of Saturday’s Randox Health Grand National have awarded an honorary 41st place in the World’s greatest race to Edie. This massive show of support will help raise awareness of DIPG and Edie’s fight by bringing it to the attention of a truly global audience.

In 2017, Jockey Club Racecourses (JCR) created an honorary berth in the race for five year old Bradley Lowery, helping to raise awareness of Bradley’s fight with neuroblastoma, and they have continued to work closely with the Bradley Lowery Foundation (BLF) afterwards. It’s through this link with the BLF, who support Edie and the Spider-Ede Appeal, that this amazing honour has come about.

Edie’s place on the racecard is explained on the Randox Health website, where they wrote:

In the racecard, Edie’s red and blue silks represent the colours of her favourite superhero, Spiderman, who also appears as her trainer. Her age is listed (3) and her elder sister Niamh and younger brother Leonard are her jockeys for the day. Edie’s actual weight (14 kilograms) also appears.

Also featured are Edie’s parents and grandparents: her father Stephen and mother Ashleigh, and her grandfather Chris and grandmothers Hazel and Ann.

Her write-up in the racecard reads: Making her Aintree debut, Edie loves walking in the park, playing with her puppy Ellie and gymnastics. But most of all she loves playing with her brother & sister and cuddles with Mummy & Daddy. Sure to make an impact, so will be well supported.

Whilst you can’t bet on Spider-Ede at the Grand National you can back Edie by donating to the Spider-Ede Appeal via Just Giving or Text Edie03 £(Amount up to 10) to 70070.

You can read more about this story on the Randox Health website and also on the BBC News site.

The Jockey Club have also produced the following video to introduce Edie:

On Tuesday 27th of March the Gladstone Theatre in Port Sunlight, Wirral, hosted a charity evening in aid of the Spider-Ede Appeal. Compared by the brilliant Ricky Tomlinson, the evening starred Birkenhead Born Country Legend Charlie Landsborough and his band, and featured actor and comedian Tony Barton along with singers Joe Wall and Kearra Bethany. The evening was a huge success, spreading awareness for Edie whilst bringing a lot of enjoyment to a packed theatre.

Grandad Chris summed up his thoughts, saying “so humbling what these people are doing for little Edie, not just the stars on stage but also the backstage people, the girls with the buckets, and of course our mate Jimmy King!”

Chris also took a few photos of the evening, a selection of which can be found below. To see more view the full gallery on Chris’ Flickr account.

Host for the evening, the amazing Ricky Tomlinson

Charlie Landsborough and his band

Posted on March 26, 2018 by David Anderson Leave a comment

The Dock AFC are kindly hosting an afternoon ‘at the races’ in aid of the Spider-Ede Appeal. All proceeds from the event will go to the appeal fund and help Edie to continue receiving her essential life-saving treatment.

Where?
St. Joseph’s Centre,
Greenbank Road,
Birkenhead.
CH42 7JY
When?
Sunday, April 15, 2018; First race starts at 2:30pm
How?
Turn up on the day and place your bets before starters orders.